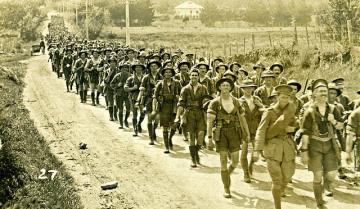 They went with songs to the battle, they were young.
Straight of limb, true of eyes, steady and aglow.
They were staunch to the end against odds uncounted,
They fell with their faces to the foe.

They shall grow not old, as we that are left grow old:
Age shall not weary them, nor the years condemn.
At the going down of the sun and in the morning,
We will remember them.

My grandfather was one of the lucky ones. He came home. This is his diary of that terrible year.

But this was not what the New Zealanders signed up for. Filled with zeal to prove their worth to the Empire, the only yardstick they had in 1914 was the Boer War, in which, of the nearly 6,500 New Zealanders, only 70 odd were killed in action (although a further 158 died by accident or of sickness).

Gallipoli was to demonstrate that this would be an entirely different war. It's been estimated that, on both sides, some 131,000 died on Gallipoli, with a further 261,000 wounded. Of the 8,556 New Zealanders on Gallipoli, 2,701 died and 4,852 wounded (one estimate; statistics vary a little).